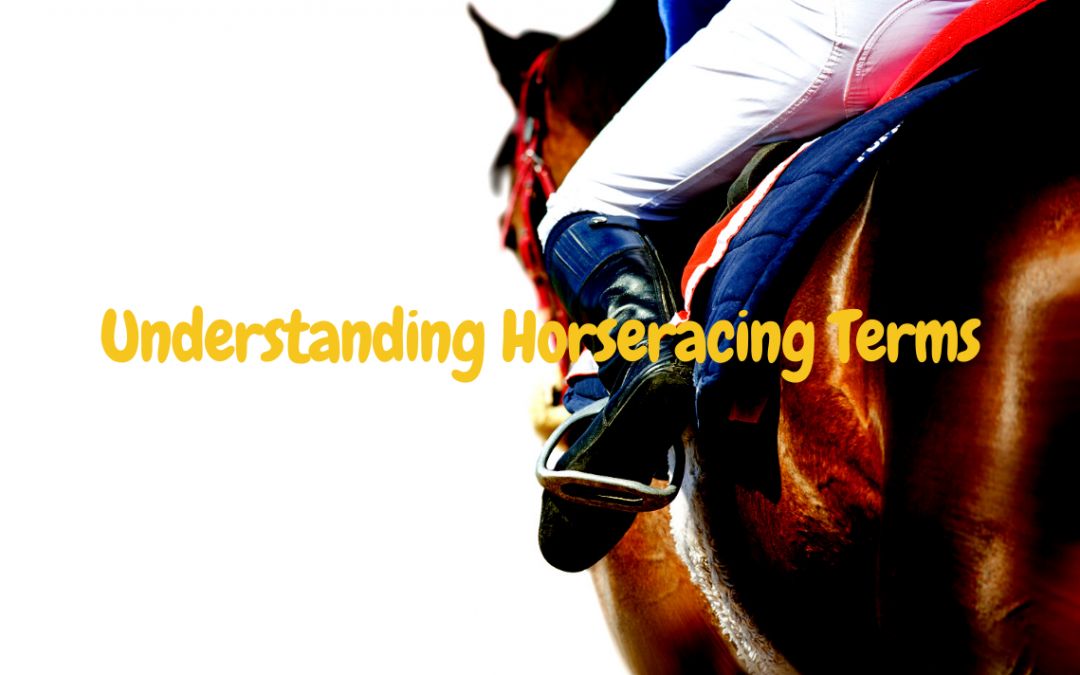 When it comes to thoroughbred racing, there are a few expressions and jargon that might perplex the unskilled ear. The language of thoroughbred racing and punting is full of colorful words, jargon, and a sort of short-hand speech that allows people in the racing industry to communicate effectively… Certain terms that are used in racing have no relationship to the horseracing industry at all but have evolved from horseracing being a form of gambling. This shows that horseracing is a sport with a long history and rich tradition.

Please submit any terms that are not yet included below for future updates.

Acceptor: A horse is confirmed to start in a race. Owners/trainers are sometimes required to pay a fee for their horse to be eligible for a race

Acceptances: The declared runners for a horse race

Age (of a horse): All racehorses celebrate their birthdays on the same day, the Australian horse’s birthday is on August 1st in the year which they were foaled.

All-In: A wager placed early after a race has opened for betting. An all in bet is placed on futures markets and it means you get the best possible odds, but you risk losing your cash if the horse is scratched.

All Up: A type of bet where winnings are carried over to subsequent races.

Apprentice: A young jockey, usually under 21 years of age who has not yet earned his/her senior license.

Apprentice allowance/claim: Reduction in the weight to be carried by a horse that is to be ridden by an apprentice jockey. It varies depending on the number of winners the apprentice has ridden.

Approximates: The approximate tote odds on offer before the final pool is closed.

B.: A abbreviation used to describe a bay horse in race books, pedigrees, and stud books.

Back: To bet on a horse in a race in any way, shape or form.

Backed In: Term used when a significant amount of money has come in for a horse, causing its odds to have shortened.

Backed Off The Map: A horse that has been heavily supported resulting in its odds shortening to a small dividend.

Backed Up/On the Back Up: To race a horse on a short turnaround, which is typically within a week.

Bagman: Bookmakers associate responsible for settling up on bets at the track.

Bailed Up: A runner racing inside other runners and unable to get clear galloping room.

Bandage: A horse’s hock is the lowest part of its legs, usually wrapped with strips of cloth for support or protection from harm.

Banker: A term used by punters to describe a horse that they believe is certain to win. Also a betting term where one horse who is a standout selection in a race.

Barriers: The starting gates or ‘stalls’ from which the horses jump at the beginning of a race. Each horse has is randomly allocated in the barrier draw for the race.

Barrier Blanket: Assists horses who are hesitant to be loaded into the starting gates. When the horse is loaded and the blanket is fastened to the back of the stall and remains behind when the horse jumps.

Barrier Draw: A ballot that is held days in advance of the race to determine which gate each horse will start from.

Battler: A trainer, jockey, or bookmaker who just manages to eke out a modest living from his full-time involvement in the industry.

Benchmark: Under this method, the weight a horse carries at its next start is determined as soon as possible after its prior race, based on that run’s merit.

Best Bet: The selection that racing journalists and tipsters believe to be the day’s most potent selection.

Betting Exchange: Internet-based organisations that broker bets between punters for a commission.

Big Note: Someone who exaggerates their expertise or earnings.

Big Noter: A punter who loves to self-promote and remind everyone when they have backed a winner.

Birdcage: Area where horses are paraded before entering the racetrack.

Bit: Part of the Bridle, the metal bar that is placed over the horses tongue.

Bl.: A abbreviation used to describe a black horse in race books, pedigrees, and stud books.

Black Book: A reminder service that sends an email or SMS when a selected horse is due to race again.

Black Type: A win in a listed or group race is an important factor when selling horses.

Blanket Finish: When many horses finish extremely close to each other at the finish line.

Bleeder: A horse that has a lung bleeding during or after a race or training session. A first-time bleeder in Australia is prohibited from racing for three months.

Blew Out: A horse that has seen its odds lengthened dramatically throughout the course of betting.

Blinkers: A piece of gear placed (cup-shaped device) on a horse to limit its vision of horses to the side and rear during a race and improve concentration.

Blow: Horses will blow or snort when they are either physically out of breath after work, excited, or getting worked up.

Blow/Blows/Blown Out: When a previously favoured horse is unwanted in betting before the race and the bookmaker’s odds have extended dramatically due to lack of support.

Boat Race: A race with several non-triers which is said to be fixed for one horse to win.

Bolter: On the track, a horse that is loose or out of control. In the betting ring, a winning horse that was unexpected to win and therefore ‘bolted in’ at big odds.

Bookmakers (Bookie): A person or company licensed by the government to accept bets.

Box/Boxed: Betting term denoting an exotic combination bet where two or more runners to finish in any order in a multiple bet such as Quinella, Exacta, Trifecta.

Box Seat: Position of a horse during a race where that horse is running right behind the leaders and one horse out from the rail.

Boxed (In): A term used when a horse is trapped in the running and has no place to go.

Bridle: A headgear, often made of leather or nylon, that fits over a horse’s head and has a bit and the reins attached.

Br.: A abbreviation used to describe a brown horse in race books, pedigrees, and stud books.

Break/Breaking In: The training/educating of young horses to be able to compete in races.

Breaking: Breaking into a gallop, when trotting horses start galloping.

Bred: A horse is bred where it is foaled.

Breeder: When a foal is born, the breeder of the mare is its dam’s owner.

Broken Down: When a horse suffered an injury; lameness.

Broodmare: A filly or mare that has been bred and is used to produce foals.

C.: A abbreviation used for a colt in race books, pedigrees, and stud books.

Cancelled Race: When a horserace is abandoned due to extreme weather conditions, quarantine restrictions on horses in the race, or for other reasons.

Card: Scheduled races at a meeting. Typically referred to as the ‘race card’.

Carry The Grandstand: A horse allocated a big weight in a handicap race.

Cast: The horse is unable to get up and is wedged in the starting stalls, usually on its side or back.

Ch.: A abbreviation used to describe a chestnut horse in race books, pedigrees, and stud books.

Check/Checked: Interference suffered by a horse during a race. If the interference is considered severe enough to have cost them an opportunity to win, they are entitled to protest that runner if it finished ahead of them in the placings.

Choked-Down: During a race, when a horse’s tongue is partially swallowed, making breathing difficult. A ‘Tongue-Tie’ usually helps.

Claim: The amount of weight carried by a horse being ridden by an apprentice.

Clerk Of The Course: Mounted racecourse officials who manage horses and jockeys on the race track, and lead the winner of a race back to the mounting yard.

Coat-Tugger: A racecourse swindler who will offer a horse to a punter and, if the horse wins, is always there to collect a cut of the winnings.

Colourful Racing Identity: Euphemism for someone whose language is profane or whose behavior is slightly less than ethical.

Colours: The (silks) jacket and cap worn by jockeys to indicate the owners of a horse.

Colt: An entire (ungelded) male under four years of age.

Connections: A horse’s owners and their representatives or anyone personally connected to the horse such as the jockey and training staff.

Cop a Minty – the winning jockey receives a small consideration from the owners (green & white cash, similar to a Minty wrapper) also know as a ‘Sling.’

Correct Weight: After a race, when the jockeys have weighed in correctly, the Head Steward sends out a signal to bookies and tote indicating that bets may be paid out on winning tickets.

Course Specialist: A horse that has a favourable record at a particular track.

Cross-Over Noseband: Gear that prevents a horse from opening its mouth during a race.

Crucified: A jockey who has ridden a horse so badly as to be the main cause of it losing a race.

Crusher: A bookmaker who takes top odds from his colleagues and then offers prices on the same horse or horses at reduced odds.

Nothing beats owning a horse. CRS is all about the ultimate horse ownership experience. With CRS you will be able to meet the jockey, chat with the trainer and have celebratory drinks after the race regardless of the result. CRS is extremely proud to be the only syndication company fully focused on country horses, breeders and trainers. CRS offers a premium quality product with a boutique-style stable and service. ​
Learn more